Frittsolar - Covid lockdown and learnings for our pollution problem

Spread across urban and rural India is one problem that has prevailed for a long time now and that’s the immense levels of pollution. It not only poses a great risk to human health, leads to loss of productivity levels, increase in public health expenditure, damage to food crops but is also the cause of problems like global warming, at large.
It is being tackled by the government through the introduction of new policies like the odd-even rule implemented in the capital city, New Delhi, and also by promoting the usage of renewable sources of energy like rooftop Solar Panels Installations for residential and business purposes.

However, one of the major causes of the pollution levels going down in 2020 was the planet being hit by COVID-19. Over half of the world being affected by it, the pandemic resulted in over 50 countries imposing a lockdown that prohibited any activity outside the home for a fixed amount of time. The lockdown led to industries shutting down and vehicular traffic being almost non-existent, both being major contributors of pollution.
Nitrogen Oxide levels during the shut-down came down drastically, as compared to the same time in 2019. 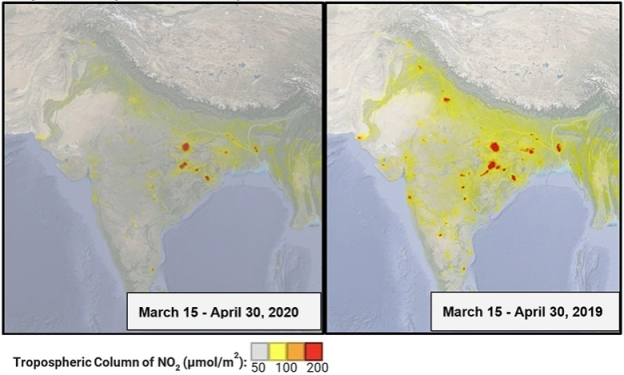 However, NO2 is not the only harmful pollutant that poses threat to human life.
PM2.5, which consists of small particulates capable of entering the bloodstream and causing serious damage to the lungs, also showed a reduction in the atmosphere.
Although the pandemic facilitated a decrease in the pollution levels, there is another correlation between the two.
Since the virus spreads from an infected person’s coughing/sneezing droplets suspended in the air and coughing/sneezing is also a common response to air pollution, it leads to a higher risk of people getting infected. Also, it’s a known fact that the susceptibility and severity of the infection in those who suffer from chronic diseases is higher, which is all due to high levels of pollution around us.
Therefore, it is best for us to stick to ways that keep pollution levels low and make more eco-friendly choices in your day to day life.

As mentioned above, switching to renewable sources of energy is one of the best solutions to combat this situation of pollution. Solar panels installation is cost-effective and low maintenance and helps keep the environment clean. One can get various solar offerings to suit their needs. At Frittsolar, we provide you with the best quality solutions and services so that you can contribute your bit towards a healthier, cleaner and greener tomorrow.