Do Duties And Tariffs Really Help The Indian Solar Market? 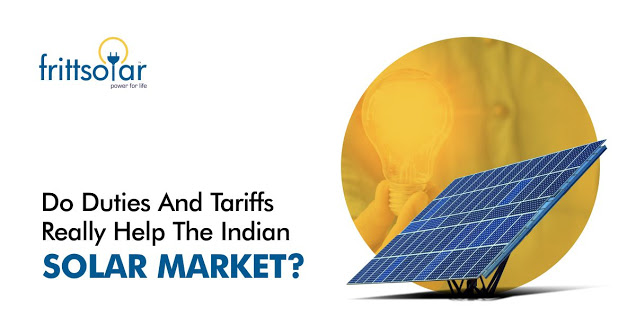 Oxford Economics, a global forecasting firm predicted in its recent studies that global GDP will fall by more than 20% if the current policies of global warming are not changed. It also pointed that India with a coastline of almost 7500 km could lose nearby 90% of its GDP.

Power sector being a core sector of the economy, is a very important part of the nation’s security infrastructure. India’s current per capita electricity consumption is around 1400 kWh per annum in comparison to 10000 kWh per annum of the developed nations in North America and Europe. By providing industries and the populous we can move India towards its development and economic goals. In the draft report Central Electricity Authority (CEA) in July 2019 stated that India would need an installed capacity of 831 GW by 2030 compared to 360 GW of 2020.

For nation’s development and security mandate it is important that we have a local manufacturing value chain. It would be a great threat to the nation, if we completely dependent on foreign suppliers for something as critical as the power sector.

In this paper, we will try to understand whether if Safeguard (SGD) and Basic Customs Duty (BCD) really help the nation or is there are any other approaches that might be beneficial.

Why are we and the world importing from China?

There have been numerous reports observed in the last 6 months of Indian Government contemplating imposing duties on Chinese solar modules and cells to protect Indian Solar Manufacturers. There were discussions on Basic Customs Duty and safeguard duties. That have been furthered by border rows with china recently.

In the year 2019, despite of these duties, India imported 80% of all solar equipment worth 2.17 billion USD. China was accounted for 78% of these imports followed by Vietnam, Singapore, Thailand and Hong Kong. The reason behind high level of imports from China is that they are far ahead of every country in terms of manufacturing capacity and they enjoy significant of economies of scale.

At present, the global annual solar PV production is around 140 GWP. Out of which nearly 90 GWp or almost 70% is located in China. Chinese companies also control some capacity outside China like the REC solar in Singapore. It has a 1.5 GW manufacturing facility, owned by a Chinese firm named China National Chemical Corporation Ltd (ChemChina).

India being close to 10 GW and 3GW respectively in solar panel and cell manufacturing capacity, it’s assumed that only Indian manufactures will be able to contribute to the mission of installing up to 27 GW of solar annually for the next decade.

We have missed the solar manufacturing bus long back. The Chinese companies have a capacity of 100 GW or more so it would be beneficial for us to use this global supply chain rather than creating a new supply chain to compete with the Chinese in the module manufacturing space. Our focus should be to catch the bus and not miss it again in the renewable energy sector.

Our experience with duties from over the last 2 years. Are duties making us weaker?

As India does not make solar cells, wafers or high grade Polly silicon ingots, duties on solar panels and solar cells, haven’t really helped us. Even today, most of the solar panel manufacturers procure their solar cells from other countries.

A lot of people have raised questions fearing the use Chinese products in the power sector. As power sector is crucial to our nation, no compromise should be made in this regard. If the government really wants to secure the power sector, duties should be pushed for solar inverters, SCADA, power electronics, communication and controls infrastructure rather than solar panels.

Currently the price of polycrystalline and monocrystalline solar panels globally stands at 16 US Cents and 17 US Cents. At the current value of 75 Rs to 1 USD, solar panel price should be around 12 to 13 Rs per kWp. Indian companies are presently selling solar modules at a price of 16 – 20 Rs per kWp. By imposing duties on solar modules from China, we are actually making our end consumers and DISCOMS pay double. A market with no duties would have seen prices of solar energy drop to 2-2.25 Rs per kWh.

By imposing duties we give the Indian manufacturers a false sense of security. We feel that this approach will not work if order to make India self-reliant in terms of manufacturing for solar. It has not helped us in the last 2 years and it certainly will not help us in future too.

So what should be done?

The Indian IT Sector is one of those sectors which bring pride (and Forex) to our country. It is renowned and respected globally for its performance and expertise. Companies like Infosys, Wipro, TCS, etc. have led this sector to its current position. These companies realized that India is a hub of smart English speaking people who are even good engineers. They used the strength and history of India to develop offerings that would add value to the global service industry.

I think both our political and business leaders should think on the similar lines when it comes to the power sector. The power sector has become as dynamic as the IT industry. Renewables have disrupted the power sector like never before. 10 years back from now we could have never imagined that in 2020-2030, solar would make up to 60% of our total planned installed capacity. In such a dynamic environments our country should make big bets like the ones made by our IT leader almost 3-4 decades ago. Some actions that we should take care of are:

I would like to summarize this paper with the thought that climate change is a global issue that requires more global cooperation today than even before. Instead of putting duties on the global supply chains and making things more expensive, we should focus at providing incentives to our local solar manufactures to make them globally competitive, thereby we should also open potential export opportunities for them. By following the basic laws of supply and demand. As price goes up, demand goes down we could go a long way.